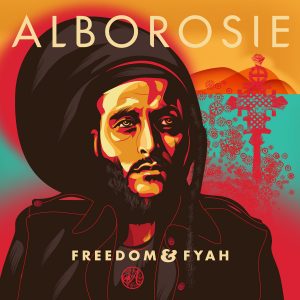 Reggae music is no longer confined by race, skin colour or nationality.

It always did have a global message, but the culture that it represents has now extended way beyond Jamaica. Alborosie’s success is symbolic of this new spirit sweeping the reggae world. Not just because of his knee-length dreadlocks and fluent patois – learnt from having lived in Jamaica for over a decade – or the revolutionary songs and deep, heavy roots rhythms that have become his trademark.

Sicilian born, he is the complete package – a festival headliner who’s written, played and produced a succession of bestselling albums since his 2008 debut Soul Pirate, and now culminates in this latest set for Greensleeves Records which he says has

“A very strong dub influence, and with signs of dub-step and electronic music in some of the tracks.” “It’s like a concept album”

“On most of my albums, you might have a roots or rub-a-dub track and then you have a ska, but this time they’re all headed in the same direction. It’s a new adventure for me although lyrically, I cover everything as usual. Reggae is a very social music so I touch upon politics, love and revenge but it’s Freedom & Fyah, right? That means you’re going to get songs of freedom, and you have to go through fire as well because there are people who love us and those who don’t and so I can’t be a hypocrite and tell people how everything’s fine all the time. We have to fight back sometimes and the way I do that is by making songs like Poser. People always pretend to be good but behind the scenes they may be doing something bad, so that song is like a judgment, y ‘understand? And I include myself in that because I don’t want to be judging people and saying I’m clean and nice or whatever. No, we’re all human, and we make mistakes. That’s how life goes.”

Poser is one of two former hits included on the album. The other is Rocky Road, although this version’s different from the single. The video portrays Alborosie as an old man, complete with grey beard, watching footage of himself as a child and then a young man before an imaginary son and grandson put in an appearance. The message is profound and yet he can still be playful, even when expressing fundamental truths like the cycle of life and death.

Elsewhere he delivers uncompromising Rasta lyrics, as heard on blazing roots tunes like Can’t Cool, Judgement and Cry, which derides the gunmen who’ve turned Kingston’s inner city communities into killing fields. On Rich he warns that money doesn’t bring happiness whilst Everything recalls the early eighties, when rhythms by the Roots Radics ruled the dancehalls. Working out of his own Shengen studio, nestled in the Kingston foothills and surrounded by vintage audio equipment, as well as the latest computer technology, Alborosie is a master when it comes to bringing the old school back to life – not by copying what’s gone before, but by reimagining it for today’s audiences. He’s done this successfully throughout his career and whilst he’s now widely celebrated for it, this hasn’t always been the case.

Bashment dominated the charts when he began developing his own sound, and local producers insisted that his authentic style of reggae music was just for Europeans.

they told him, only to see the likes of Chronixx and Protoje change things round, and for roots music to become popular again. “Pupa Albo” was a forerunner of what’s been described as “Reggae Revival” and Protoje now joins him on Strolling, which Alborosie likens to a reggae-style Western.

“We’re saying that when the Rastaman is strolling into town, it’s on a different level,”

he says, with a smile.

“Because he’s full of attitude, like with the ganja and the whole Rastaman vibe, coming from the countryside to Kingston. I’ve known Protoje from before he became famous but all the people I work with are brethren, and there’s always a special relationship between us. That’s how it is with Ky-mani Marley too, who’s a very crucial ingredient in my recipe. He came to Gee Jam studio when I worked there and we hit it off straightaway. It was just natural between us, y ‘know? He’s a son of the music and I have music in me too, so it was easy for us to do some collaborations.”

Ky-mani guested on Alborosie’s debut album, and they later reworked a handful of Bob Marley covers together. Their latest duet is an original love song called Life To Me that’s wrapped in choral harmonies, and has tender lyrics praising the special women in their lives. Ky-mani and Protoje are both major talents, but Alborosie also has a reputation for promoting up-and-coming artists such as Sandy Smith, who is one of his regular backing singers. Her bestknown hit is No Joking Thing, which Alborosie produced in 2013.

“We’re singing together on a track called Carry On and it’s worked out really nice. She’s very sensual and she’s beautiful as well so I could have done something with her for the radio but I decided to go for straight dub instead because at the end of the day, reggae is a militant music and that’s how I see it. It’s a mission. We do it to help the people, and to try and create a better environment. It’s never music where you just listen and nothing registers. No, because it’s like a book – a book of life, and it has to be inspiring.”

His other surprise guest is also Jamaican, although few people outside of Alborosie’s inner circle will have heard of her.

“Her name is Sugus, and she sounds so amazing that I had to record her,”

“She’s the female version of Horace Andy and she’s been a singer from a long time, because she used to sing backing vocals for artists like Dennis Brown and Gregory Isaacs in the seventies. She’s an elder, y ‘know? She’s actually my girlfriend’s grandmother but she has the sound that I really like.”

Sugus features on Zion Youth, which is a rallying cry for today’s Rasta warriors and also Fly 420 – a track that is the perfect synthesis of traditional reggae and more progressive styles such as dub-step. Alborosie’s travelled far since arriving on the island in 2001. It was early singles like Kingston Town and Herbalist, recorded for his own Forward label that gained him recognition in grassroots circles, but his stature has grown immeasurably since signing with VP Records / Greensleeves in 2009, and recording the classic Escape From Babylon.

The cover of that album depicted him leading musicians of all nationalities from the ruins of modern civilization, and pointing the way forward like Moses leading them to the Promised Land. Eight years later and a similar vision’s evoked once more in the words of Jamaican preacher the Reverend Rohan Treleven, who delivers a stirring speech at the onset of Freedom & Fyah.

“There is music in you,”

“You will speak to your generation but by the word of the living God, may you direct it to the glory of God and the building up and the strengthening of humanity.”

Such words could easily apply to Alborosie together with the promise, delivered in a voice as if from the heavens that

“You will take your place and be a blessing to your generation.”